Waking up to thousands of raindrops splashing against my window prompted the impetuous decision to cancel all of my plans for the day.  I lit every candle in my apartment, turned on my favorite gloomy day collection of Otis and Ella, and compiled a list of ingredients necessary to make the ultimate comfort food – coq au vin. While rain is a good thing, as Hemingway perfectly penned, “wine is a grand thing – it makes you forget all the bad.”  And nothing is grander or better at making you forget than wine, and bacon, and brandy, and butter sautéed crimini mushrooms, with a little chicken tossed in for good measure.

After poring over recipes, I called my best friend to come over and partake in the wine/bacon goodness (it’s unforgivably selfish to make something so delicious and not share) then set to work in the kitchen.  . 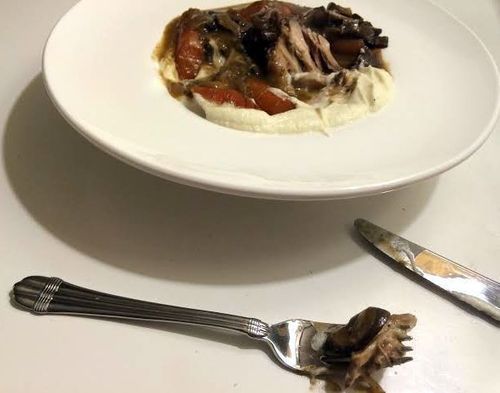 I quickly realized that it’s impossible to do the dish justice while cutting corners.  Simply placing everything into a pot and throwing it in the oven turns the dish into a boring stew, and even skipping the buttered mushrooms (which requires a separate pan) takes away so much from the dish that it just isn’t worth the time you would save.

That said, nothing about the recipe is particularly difficult.  My best friend sat in the kitchen while I cooked, sipping wine and filling me in on the intricacies of his very dramatic life, keeping me so captivated that I could only spare a fraction of my attention for the coq au vin…  But it will necessitate a block of your time – the perfect project for a lazy Sunday afternoon.  Trust me; the result will be worth every second.  xx tt 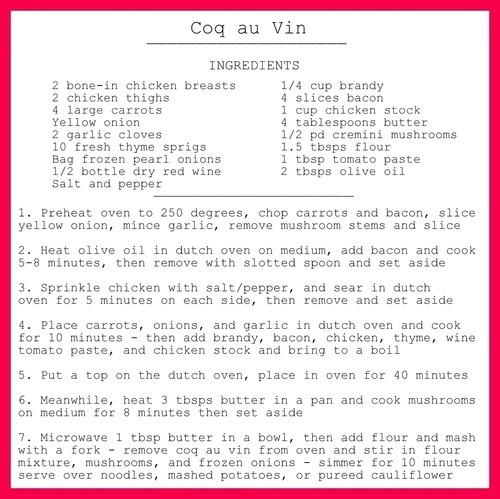 t+tTIP: Speaking of Mr. Hemingway, the storm we’re experiencing prompted a movie-marathon.  I opted to keep my film choices to those made in San Francisco, and fell in love with Hemingway and Gellhorn.  The HBO movie chronicles the mad passionate love affair between the infamous literary couple.  Clive Owen expertly captures the author’s provocative charisma and legendary temper, while Nicole Kidman thrills as the lusty leftist take-no-prisoners journalist.  Though a bit tortured (think risqué sex scenes, vicious shouting matches, witty banter, and multiple divorces) the love affair is infectious and inspiring.  Highly recommend!