Executing the perfect cupcake conjures visions of 2005 – the year that Sprinkles became en vogue, with Kara’s, That Takes the Cake, and American Cupcake nipping at its frosted heels.  While I was never a cupcake fanatic, I partook in the individual-sized confections every now and again.  I once attempted to make my own, but failed miserably because I forgot to use cupcake liners (think charred brown cupcakes with neon pink centers and lumpy store-bought icing that tasted more like Pam cooking spray than any discernible cupcake flavor).  I promptly hung up my pastry chef hat.

When my friend Maria started planning a homecoming gathering for her Naval Officer brother, I offered to cook something for the fete.  I have been dying to make Barefoot Contessa’s coconut cake for months, and mentioned the idea to Maria.  When she seemed less than thrilled, I upped the ante by suggesting patriotic red, white, and blue cupcakes in three different flavors.  With the hostess’s enthused consent, I began researching recipes and techniques to avoid another burnt neon mishap. 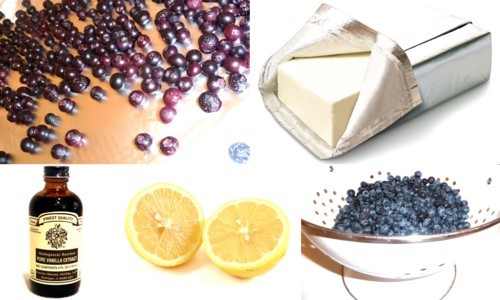 For “white” I chose coconut cupcakes, but “red” and “blue” proved more difficult.  My favorite Kara’s cupcake is Sweet Vanilla with Madagascar Bourbon frosting.  I presumed that Madagascar Bourbon was actual bourbon, and decided the flavor would be perfect for a group of burly men.  I quickly learned that Madagascar Bourbon is less Bulleit and more upmarket vanilla extract.  I kept the frosting flavor, but added it to strawberry cupcakes to comprise a more complex “red” taste.

Researching “blue” cupcake flavors was trickier.  Most blue cupcakes are vanilla with electric blue food coloring, which is less than epicurean.  Blueberry cupcake recipes abounded, but they were presented more like blueberry muffins than blue cupcakes (yellow cake with whole blueberries).  Determined to make a blue cupcake sans food coloring, I decided to follow one of the muffin-like recipes, but instead of using whole blueberries I roasted the fruit so that when I added it to the cake batter the berries exploded – turning the batter into an exquisite shade of sapphire blue.  I topped the cake with lemon cream cheese frosting, which brought the dessert to an entirely new level of delicious.

The gem-hued treats have a refreshing appeal that isn’t often found in traditionally saccharine cupcakes. Equal parts sweet and tart, the bold blueberry and lemon flavors were a hit at the party.  Many of the guests guessed that the cupcakes were store-bought, which is a far cry from the neon calamity of 2005.  I suppose it’s time to pull that pastry chef chapeau out of storage!  xx tt ·  In a medium bowl sift together flour, baking powder, and salt

·  Once the blueberries have completely mixed into the batter, add the rest of the flour mixture

·  In the bowl of an electric mixture fitted with the paddle attachment, cream together the cream cheese, butter, vanilla, and lemon extract

·  Add blue food coloring, then add red coloring until you reach your desired shade of periwinkle

toolBOX: Avoid the temptation to purchase disposable plastic icing bags!  Do your part in the green movement, and buy a pastry bag that you can easily rinse out between uses. 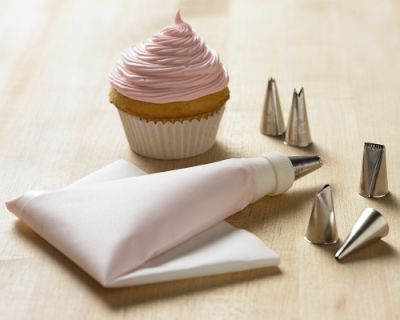 t+tSTYLE Channel a blueberry in this confection-inspired frock from Monique Lhuillier’s Fall 2010 collection.