In 2005, like many of my post-college counterparts, I embarked on a shoe-string budget romp through Europe.  As my boyfriend at the time had never set foot outside of America, I crammed six cities into our three week excursion - London, Paris, Munich, Rome, Venice, and Florence.  Ever the over-planner, I painstakingly created three Excel spreadsheets to make sure that we took advantage of every single European second.  I was certain that it would be the best trip ever…

Fate had other plans in store.  The morning before we were scheduled to fly out, we got the devastating news that the British fell victim to a suicide bombing on the subway system.  When we arrived in London the next day, the city was eerily quiet and the subway from the airport into the city was nearly empty.  We decided to avoid taking the subway for the rest of the trip, but trains proved unavoidable. I didn’t sleep a wink on our overnight train from Paris to Munich.  The same went for our train from Munich to Italy.  By the time that we arrived in Rome at 6:30AM, I was so sleep-deprived that all I could think about was getting to our hotel room.  When we arrived at our hotel, we learned that check-in wasn’t for three hours.  Despite my desperate pleas (and the tiniest tantrum) there was no way that we were getting into our room one second before 9:30AM.

Dejected and exhausted, my boyfriend and I began wandering aimlessly through the streets of Rome.  Just when I thought that I couldn’t take a step farther, I looked up and was standing in front of the largest and most exquisite baroque fountain I’d ever seen.  Despite seeing it countless times in pictures, the Fontana di Trevi is utterly breathtaking in the flesh.  My fatigue subsided when I realized that I was in one of the most beautiful and historically-rich places in the world. Reenergized, my boyfriend and I opted to continue exploring the city.  We climbed the Spanish Steps, ate gelato in front of the Pantheon, salivated over the Fall collection at Prada, and found ourselves at the Piazza Navona by lunchtime.  We landed at a wine bar called Cul de Sac, a hole-in-the-wall restaurant with wine bottles lining the interior and patio seating for dining alfresco.  With over 1,500 wines to choose from, we knew that we had found a hidden gem.  But perhaps the most magnificent discovery of the day was the absolute best lasagna I have ever tasted.  The bolognese sauce literally melted in my mouth, and I’ve often dreamed of it since. Several years (and several boyfriends) later, I decided to recreate the mouth-watering Cul de Sac bolognese.  After numerous attempts, I have finally developed a recipe that evokes my memories of Rome and that delicious lasagna.  With autumn decidedly upon us, this is the perfect time to spend the day making this five-hour meat sauce to share with friends and family.  xx tt ·  Crumble and loosen using your fingers

·  Pour white wine over the meat, and incorporate so that meat is evenly moisturized

·  Combine pancetta and garlic in a food processor, and process into a fine paste (this is called a “pestata”)

·  Cook for about three minutes, until the garlic and pancetta are sizzling and a good amount of fat has pooled in the pan

·  Add onions, and cook until they start to become slightly translucent

·  Add carrots and celery, stir while cooking for about five minutes

·  Push vegetables to the side, and add meat to the pan

·  Sprinkle salt over the meat

·  Give meat a few minutes to brown, and then stir/spread/toss and mix with vegetables until all of the meat browns

·  When the meat has emitted a great deal of fat, turn the heat up to high and stir often until the liquid dissipates (this will take about 45 minutes – DO NOT let the meat burn, lower heat if necessary)

·  In sauce pans, heat up the milk and broth/water

·  Once the meat has been de-liquefied, make a small circle in the middle of the meat, and add the tomato paste so that it may brown for a minute, then stir into the meat

·  Grate two tablespoons (about half) of a nutmeg into the meat

·  From this point, the Bolognese will take three hours to complete

·  Add one cup of milk every twenty minutes

·  If the liquid is evaporating too quickly, or you run out of milk add broth

·  If the liquid isn’t evaporating quickly enough, turn up heat – but make sure to stir frequently so that portions of the sauce do not stick to the bottom of the pan

·  Serve over your favorite fresh pasta, and freeze extra sauce for up to three months, buon appetito!

t+tTRAVELS: traveling can wreak havoc on even the most perfect visage.  To avoid looking haggard upon arrival, I always fly with the following…

toolBOX: make your bolognese in this stunning copper stock pot.  Mauviel is a favorite of One Kings Lane and Gilt Groupe lately, so check for discounted prices! 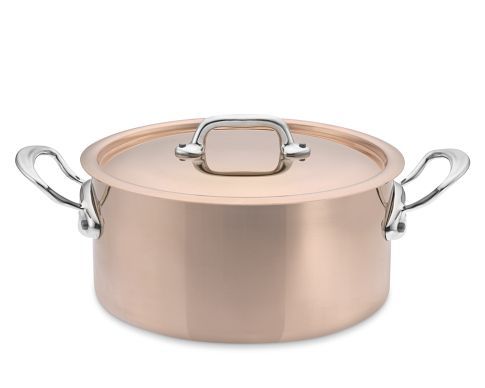