Salmon is a fish drenched in indelible mysticism.  Legend has it that an adventurous salmon once fell into the Irish Well of Wisdom, and in doing so gained all of the knowledge in the whole entire world.  Apparently, anyone who eats the lauded fish gains its knowledge.  After learning of this fancy secret power, I felt honored to serve the fish at a recent going away party.

Unimpressed by the taste of plain salmon, I decided to whip up a marinade that would also serve as a garnishment after the fish was grilled.  Ingeniously tasty, this simple marinade turns boring salmon into bite-sized portions of heaven.  The tangy fusion of Dijon mustard with soy sauce and wasabi is mellowed perfectly by the addition of sweet honey.  The icing on the cake – the marinade took less than five minutes to prepare, and the entire dish was done in half an hour.  In fact, this fish was so easy to cook that I nearly forgot about my disastrous first attempt at making salmon… 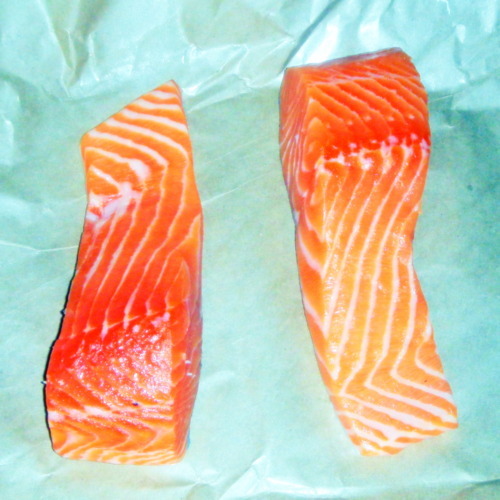 Circa 2005, I had just moved into my first San Francisco apartment in the Marina District, directly across from A16 restaurant (one of my all-time favorites).  Feeling quite grown-up, I was determined to throw my mother a birthday dinner party.  I invited all of her friends, bought beautiful floral arrangements, borrowed an extra dining table so that everyone would fit in my tiny one-bedroom, and set a menu of butter lettuce salad, baked salmon with parmesan asparagus, and a chocolate cake from Miette.

I was completely clueless as to how to bake salmon, so I called mom for advice.  She suggested that I wrap the salmon in foil with butter, parsley, and lemon and pop it in the oven for twenty minutes.  Unfortunately, she didn’t suggest that I place the foil-wrapped salmon on a baking sheet.  As the salmon baked, the butter melted and pooled in the bottom of the oven – creating dense black smoke that filled the entire apartment building and triggered the fire alarm.  By the time my mother and her friends arrived, they were kindly greeted by several members of the San Francisco Fire Department, who (luckily) found my cooking snafu hilarious.

Needless to say, I’ve come a long way in the kitchen.  And I credit this transformation entirely to all of the knowledgeable magic salmon I’ve eaten since!  xx tt 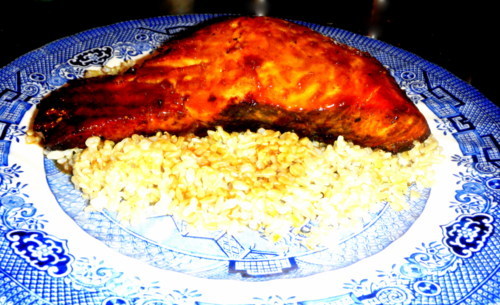 ·  Drizzle half the marinade onto salmon, let rest for 10-20 minutes

·  Place salmon skin-side down on the grill

·  Discard marinade salmon was sitting in

·  Carefully remove from grill, and place on baking sheet

·  Place baking sheet in oven for 15-20 minutes, or until fish is done

·  Serve over brown rice, drizzle the remaining half of the marinade over the fish