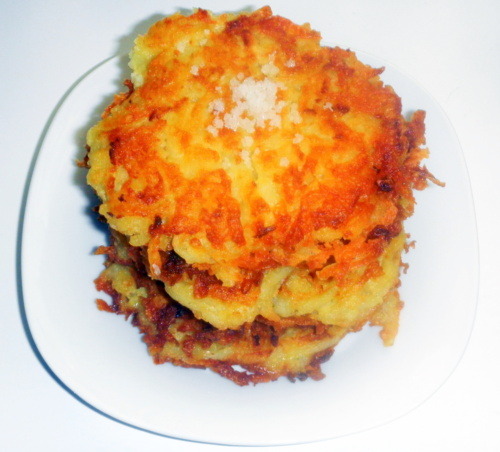 In honor of the first night of Hanukkah (and my shiksa goddess aspirations) I made latkes, a variation of the classic potato pancake.  Legend has it that latkes are served during the Jewish festival of lights because they are prepared in oil – which symbolizes the cruse of oil that was supposed to light the menorah for just one day, but miraculously continued to burn bright, lasting instead for eight. 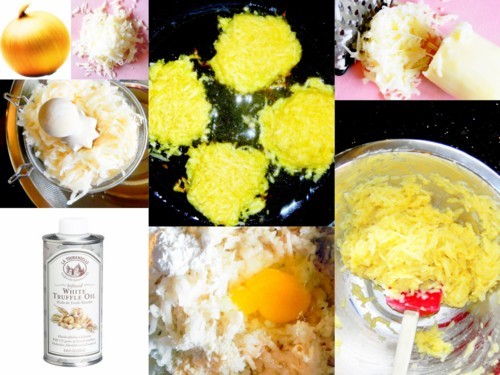 While latkes are traditionally served either as a savory dish with sour cream or a sweet dessert paired with applesauce, I prefer to eat them naked.  To elevate the centuries-old delicacy to the appropriate level of modern-foodie chic, I added a surprising sprinkling of homemade truffle salt.  The lightly greased and perfectly crunchy potato mixed with delicate truffles made for a delicious holiday treat.  Happy Hanukkah!  xx tt ·  ½ cup corn oil (or olive oil if you’re less picky – the corn is flavorless, which is why I used it)

·  Using a big grate box, grate the potato using the largest of the holed sides

·  Now you have to drain the excess moisture from the potato-onion mixture – either:

1)      Put mixture into a sieve over a bowl, and push the water out through with a pestle, or the back of a spoon

·  Put the mixture into a large bowl, and add the flour, breadcrumbs, egg, pepper, onion powder, and salt

·  Mix well with a spatula or fork

·  Heat the oil in a large frying pan

·  CAREFULLY (I burned my thigh, which I’m currently icing…) scoop ½ cup of the mixture into the pan

·  Repeat three times, so that there are four latkes in the pan

·  Cook for five minutes per side – or until browned

·  Mix the fleur de sel and truffle oil in a ramekin

·  Sprinkle truffle salt over each latke (or whatever topping you pleasure)